Around 45,000 historic black and white prints and post-cards from the Early 1900’s both Merchant and Nava 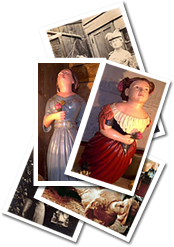 l, showing Ships Figureheads on and off the bow.

Over 800 books and publications on the subject of Ships Figureheads from around the world, including an extensive collection of original magazine and newspaper articles and cuttings from 1850 to the present day.

With the help of this archive and related material it is possible to research the history of individual carvings both Merchant and Naval, to date a number of Figureheads previously thought to be unknown have been given back it’s true identity.

From the Maritime Museum of the Altantic – Nova Scotia. Canada.

“In 1971 a figurehead from Parrsboro was acquired by the Maritime Museum, the identity of the vessel from which it came from was a mystery, however in June 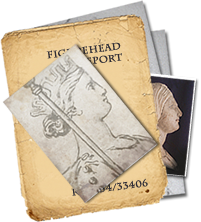 1991 the Museum received a letter from Richard Hunter of England, requesting information on the figureheads in it’s collection, after a short time the Curator of Collections Marven Moore had an interesting letter back, with the following comment…

“I was very interested in your carving M71.31.1 (museum accession number) you don’t have a name on this figurehead, however I have within my archives an old back and white print showing this carving with the name “R.B. Porter” during the time it was owned by a local family in Parrsboro, armed with this information it was possible to find that the carving had been taken from the Brig of 1857 and lost in 1860”

This is only one of a number of Figureheads given back it’s true identity it is possible with the help of the archive is research individual carving, with the help of a Figurehead Report, details of such reports can be given on request.

Future of the Archives

Richard Hunter has written a large number of articles on the subject of Ships Figureheads for both magazines and newspapers around the world, and has lectured on the subject at the following locations.

Plus several maritime and historical clubs and associations around the United Kingdom, with the help of slides and models of Figureheads taken from the Archives.

In January 2000 Awarded the Winston Churchill Memorial Trust Travelling Fellowship, in the Sir James Knott Award category, for Maritime projects from applicants from the North East of the Untied Kingdom, under the project heading: